Trading on market indices has become an increasingly popular way in which to make financial profits. Rather than speculating on the outcome of a price movement of an individual stock, you can instead chose to speculate on the direction that an entire exchange will make over a market session. 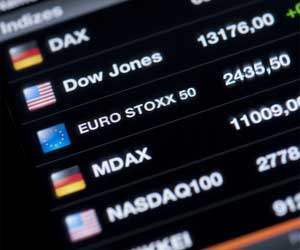 Trading Indices originally started out as a form of futures trading. It is however now possible to make use of binary options contracts to carry out the same function.

The key difference between this and the trading of regular assets is that you are actually speculating on a ‘basket’ of stocks which are weighted to make up the index. As well as being tied to the economic fortunes of a region, you need to be aware that the constituents of each index will be different. This is true for exchanges even within the same economic region. For example while both US indices, the constituents that make up the Dow Jones tend to be more focused on industrial production, with those making up the NASDAQ tending to be more technology based.

Indices are often seen as being a good starting point for new traders as they tend to exhibit less volatility than the other asset classes. The key thing to note when trading Indices are the opening hours. These vary depending on the geographical location of where the Index trades, so you will need to factor in the different time zones into your trading forecasts.

Dow Jones – The Dow Jones Industrial Average is probably the most notable financial index in the world. Founded in 1896 it is made up of 30 major US stocks which are price weighted in order to produce the index. While historically it has tended to weighted to industrial producer companies, it is component companies now cover a wide range of industries with notable constituents including Coca Cola, McDonalds, ExxonMobil and Microsoft.

NASDAQ – From its origins as the first electronic exchange, NASDAQ has grown into one of the largest exchanges in the world. It does not contain any financial companies which are quoted in a separate exchange (NASDAQ Financial 100). While it is predominately made up of US companies, it also lists some incorporated outside this region. It is heavily weighted towards ‘new industry’ sectors with key listings include Amazon, Google, Dell and Yahoo.

S&P 500 – Often referred to as the best barometer of US economic health, this index is made up of over 500 companies covering a wide spectrum of  the US market. Constituents are added by committee rather than the rules based systems used by other indexes. Many companies from other US indices are also included within this index. Key companies of note include Google, Microsoft, Microsoft, Nike, McDonalds and ExxonMobil.

FTSE – The FTSE 100 (not to be confused with the FTSE All-Share) is a share index quoted on the London Stock Exchange. It is made up of the 100 largest UK companies based on market capitalization. Like most major indices the Index is weighted. In total it makes up over 80% of the total capitalization of the London Stock Exchange. Notable companies in this index include British Petroleum (BP), Shell, HSBC and Vodafone.

DAX – The DAX is a blue chip market index which is comprised of the 30 largest German companies in terms of their market capitalization. It is a widely watched European index and is seen as an indicator of economic growth in the Eurozone. Key companies listed on this index include Commerzbank, Daimler, Deutsche Bank, BMW and Siemens.